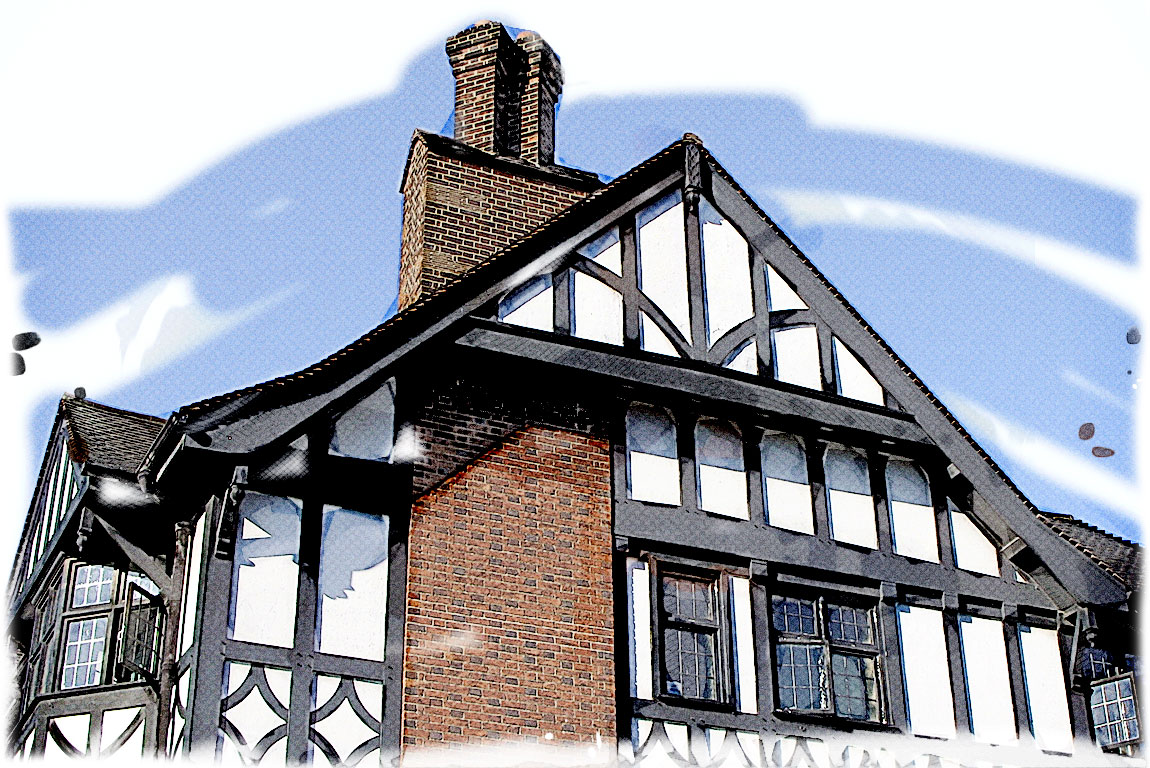 Mixed among the Bungalows, Mid-Century Moderns, and Mission Revivals are the English-inspired Tudors of Northeast Los Angeles. Many need some updating.

Perhaps one of the most famous Tudor Revival homes in Southern California is the Greystone Mansion in Beverly Hills. When it was built in 1925, its 55 rooms and $4 million cost set records – and arguably, set a tone for the English-cottage inspired Tudors (on a smaller scale) throughout the region.

The middle class loved them, and kit homes in the 1910s and 1920s were purchased for as little as $1387 (for three bedrooms, or $1657 for the four-bedroom model) and made their way to Eagle Rock, Highland Park, and Glassell Park real estate developments, and elsewhere in the Northeast Los Angeles neighborhoods. For the rising middle class, these were homes with distinct characteristics that said they were no longer on a farm but part of a growing metropolitan region: multiple gabled rooflines, often at right angles and steeply pitched; half-timbered facings; rounded entryway and window openings; and a fireplace, the hearth of the home, functional or just decorative. A whimsical version of the style, called “Storybook Tudor” or “Hansel and Gretel Cottage,” sometimes had thatched roofs (which can be very expensive to maintain).

So what does it take to restore a down-at-the-heels Tudor? Some were built as early as 1900 and up until World War II (1941), so it’s likely that any Tudor revival homes for sale in Mt. Washington, Garvanza, or Hermon are like anywhere else: the roof, the mechanical systems, the exterior cladding, and the kitchens and baths might need some attention.

As every home will vary, here’s a rule of thumb with any fixer upper: Find a comparable home (style, square feet, number of beds and baths) that was sold as newly renovated. Subtract from that the price you might pay for a home. From the difference, add eight to ten percent – because almost all projects grow once you dig into the details. That’s how much you have to budget for your renovation. The reason to go higher than that amount regardless is if you plan to live in it a long time and you feel like you can’t wait for something else to come on the market.

There are Tudor Revival preservation societies throughout the British Commonwealth countries as well as the U.S. and Canada. Culled from several of their websites, the following are the dos and don’ts of preserving the integrity of the style:

• If the roof was slate or tile, use the same for repairs and replacements. (If you want to go green, there are recycled rubber tile facsimiles that can be used convincingly.)
• Do not replace the windows but instead restore the originals. That might require an interior storm window of triple glazing in a harsher climate, but in LA original glass is considered sufficient.
• Preserve and restore original half-timber and stucco details on the exterior.
• Maintain original quality features of kitchens and baths. Glazed tiles from this era are often gorgeous.
• Resist the urge to “open up the first floor,” in part because those walls are plaster-on-lath. Also, the asymmetrical floor plans are characteristic of the style.
• Keep the original copper gutters if possible. Modern repair work can save them.